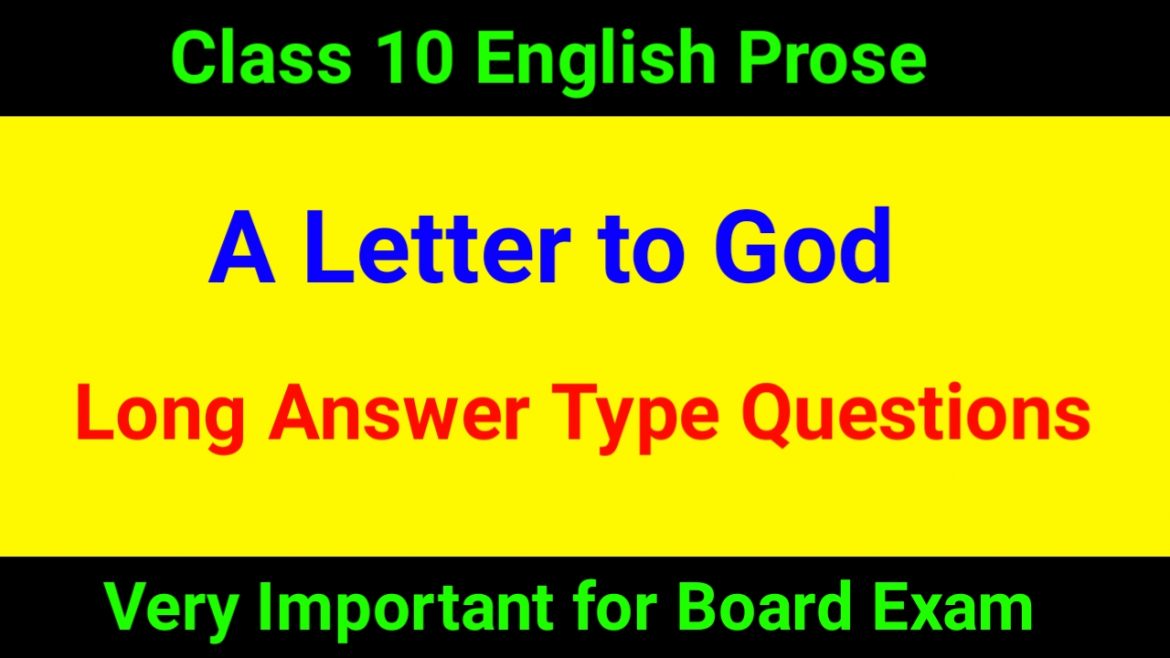 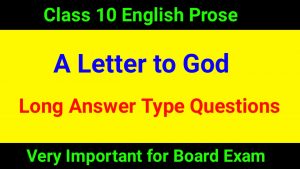 Answer the following questions in about 60 words.

1. Draw a character sketch of Lencho.
Ans. Introduction – Lencho was a poor, hard-working farmer who was the only bread-earner of the family. His crops had been destroyed by a hailstorm, He wrote a letter to God demanding him some financial help. He had immense faith in God and believed that God will help him in his misery.

Hard-working – Lencho worked hard like an animal in his fields. He was sad and disappointed by the destruction of the crops but he was ready to sow his fields again.

Faith in God – Lencho’s optimistic nature was based on his firm faith on God. He believed that God is watching everything and no one will die of hunger. God will send him the money to sow his field again and feed his family till the crops comes.

Stupid and Straight Forward – He was hard working and simple man but he was not able to recognise the help of the post office employees. His faith on God was so strong and unquestioning that he was not able to think that anyone else except God can help him.

Conclusion – Lencho was a simple, hard working and innocent farmer who had immense faith in God. This faith made him ignorant from the helpfulness and kindness of other people.

2. How did the hailstones affect Lencho’s field? What was Lencho’s only hope?

Ans. Being a small farmer, Lencho was completely dependent upon the crops of his field. Once a heavy downpour occurred and along with it hailstones also started falling. As a result the field turned white as if it had him covered with salt all over. This annual crop was completely destroyed. Even there was not a single flower left on the plants. In the entire village there was no one to help him in his problem. Being a firm believer in God, he turned to the Almighty for the help, he wrote a letter to God requesting to send 100 pesos so that he might sow his fields again till the next crop comes. He had a belief that God would certainly help him with the money.

3. How did post-office employees help Lencho? How did Lencho react to their help?

Ans. The postmaster needed something more than ink and paper to answer the letter, he needed 100 pesos. He gave up a part of his salary and asked all other employees to help. Even he asked his friends to contribute for a cause of the charity. Thus, he managed to collect 70 pesos. Lencho was not surprised to receive the letter. But he was angry to receive 70 pesos instead of 100. He did not doubt God. Such was his confidence he wrote another letter to God asking him to send the rest of the money. He also warned him not to send it through the post-office because these people were a ‘bunch of crooks’.

4. What made Lencho to write a letter to God What was its result?

Ans. Lencho’s crop needed rain. But there came hailstorm. It destroyed his crop completely. Not a leaf remained on the trees, He had no corn left either for food or for seeds. But Lencho had one hope. It was the help from God. So, the next day he went to the post office He wrote a letter to God to send him one hundred pesos. He dropped the letter into the letter-box. When the postman saw this letter, he took it to the postmaster. He broke out laughing. But he became serious. He got impressed by Lencho’s faith in God. He collected money from all. He could collect only seventy pesas. He sent this money to Lencho.

5. How did the hailstones affect Loncho’s fields? What was Lencho’s only hope?

Ans Lencho was a hard working farmer. He depended on his fields for his living. He expected a rich crop that year. Only a little rain was needed for the crop to ripen. But it rained heavily. It was followed by hailstorm. The crop was totally destroyed. It was a great blow to Lencho. He lived there alone with his family. There was nobody to help him. He feared that his family would starve without food. Also he had no seed for the next crop. But Lencho believed that nobody died of hunger and he had one hope. It was help from God. With this belief he wrote a letter to God. He asked for a hundred pesos as help.

6. What did the postmaster need to answer the letter? How did he collect it?

Ans. The postmaster was a kind and amiable man. He got surprised at the faith of Lencho in God. He did not wish to shake it. He opened the letter. He came up with the idea of answering the letter. But he needed something more than goodwill. Lencho had requested God to send him money. The postmaster decided to send this money to him. So he asked for money from his employees. He himself gave a part of his salary. Many friends also gave something for this act of charity It was impossible for him to collect together the hundred pesos. So he was able to collect only seventy pesos, It was sent to Lencho.

7. How did the postmaster get the letter? What was his reaction when he read the letter?

Ans. Lencho dropped the letter into the mailbox and one of the employees, who was a postman and also helped at the post office, took that letter from the mailbox. He was surprised to see the address of the letter and laughed heartily. He showed that letter to his boss-the postmaster. The postmaster also laughed a lot by seeing the address of the letter but almost immediately he turned serious. He was impressed by the faith of the writer of the letter who started up the correspondence with God. He did not want the writer’s faith in God to be shaken. So, he decided to help the man who wrote the letter on behalf of God.