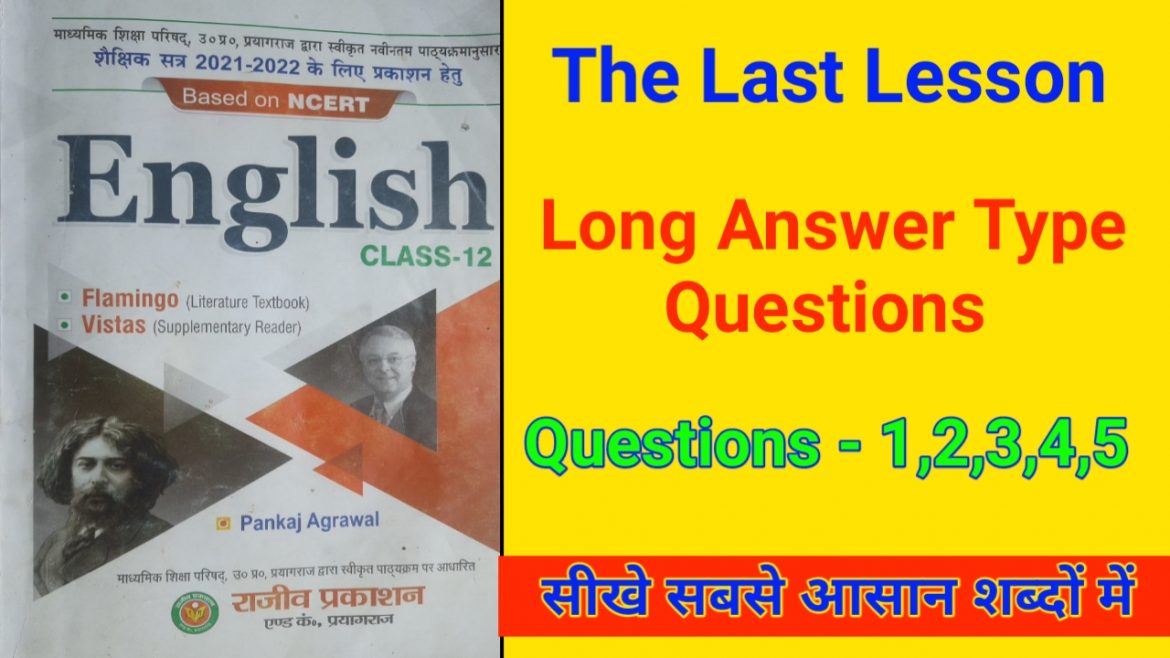 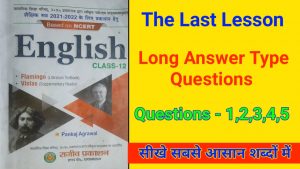 Long Answer type questions of the lesson ‘The Last
Lesson’ :

Note – Answer the following questions in not more than 150 words each :

Question. 1 Why was Franz running towards school that day? What did he noticed during the way?

Ans. Franz was running towards school that day because he was getting late for school. He had started for school very late that morning. He was in fear of scolding because M. Hamel had said that he would question them on participles. Franz did not know anything about participles.
During the way, he noticed that the day was very warm and bright. The birds were chirping at the edge of the woods. The Prussian soldiers were drilling in the open fields and when he passed the town hall, he noticed that there was a crowd in the front of the bulletin-board.

Question – 2 What was the scene inside the class when Franz reached the school?

Ans. When Franz reached the school, the scene inside the class was unusually very quiet. Usually when school began, there was a great bustle, which could be heard out in the street. He saw his classmates had already taken their places and his teacher, M. Hamel, was walking up and down with his terrible iron ruler under his arm. Franz had to open the door and go to in before everybody. He was very blushed and frightened. But when M. Hamel saw him, he said very kindly, “Go to your place quickly, little Franz. We were beginning without you.” Franz jumped over the bench and sat down at his desk. When he sat down, he noticed that his teacher had put on his beautiful clothes. Besides it, the whole school seemed very strange and solemn. One thing surprised Franz very much, he saw on the back benches of the class, there were people of village who were sitting like themselves.

Question – 3 How did the announcement of the last lesson affect Franz?

Ans. The announcement of the last lesson affected Franz very much. This announcement was like a thunderclap for him. He was very sorry when M. Hamel announced that the order had come from Berlin to teach only German in schools of Alsace and Lorraine. Franz was very sorry because he will not learn French language any more. This was their last French lesson. He was regretting not to learn his lessons carefully. Now his books seemed his old friends and he did not want to give them up. He did not want to give up M. Hamel too. He forgot all about M. Hamel’s cranky behaviour and ruler.

Question – 4 In which way did M. Hamel blame himself and others for the negligence of the study of French language?

Question – 5 What happened at last? How did M. Hamel last the class?

Ans. At last, there was huge silence in the classroom and M. Hamel explained everything with much patience. He was sitting in his chair and gazing first at one thing, then at another, as if he wanted to fix everything in his mind of that little school room. All at once the church-clock struck twelve and it was time of the Angelus. M. Hamel stood up very quietly. He turned to blackboard, took a piece of chalk and he wrote –
“Vive La France!” Then he stopped and learned his head against the wall and without a word, he made a gesture to them with his hand –
“School is dismissed – you may go.”

Visit Our YouTube Channel for Board Exam Preparation – https://www.youtube.com/c/Knowledgebeem