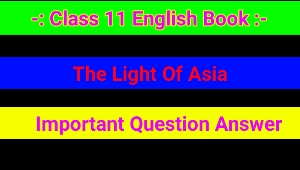 The Light Of Asia

Important Question Answer of ‘The Light Of Asia’

Qu. 1 What were the seven visions that king Suddhodhan in his dream ?

Qu. 2 Write in your own words the interpretation of the seven visions As given by the hermit ?

1. The first vision of the flag showed that the old faiths would come to an end and a new faith would begin.

2. The ten huge elephants of the second vision were the ten great gifts of wisdom.

3. The four horses of the chariot if the third vision stood for four fearless virtues.

4. In the fouth vision the king saw a wheel. The hermit said that the wheel was the wheel of the perfect law.

5. In the fifth vision the king saw a drum. It was being beaten by the prince. It meant that the voice of the prince would rise like the sound of the drum.

6. The tall tower of the sixth vision stood for the spreading of the principles of the Buddha.

7. In the seventh vision there were six men weeping with their shut mouths. The hermit said that the six men were six chief teachers.

Thus the hermit explained the hidden meanings of the seven visions of the king’s dream.

Qu. 3 Describe the city of Kapilvastu as it looked like on the prince’s first visit .

Streets : The streets covered with stones were swept. They were spinkled with water. They looked very fine.

Houses : The houses were beautifully decorated. The house wives spread fresh red powder on the doors.

Roads : Flags were hung on the trees. On the crossing of the roads there were altars made of leaves.

People : The people were full of joy. They were wearing bright clothes. They were laughing. They threw garlands into the chariot. It looked as if they were enjoying life to the full. All of them were crying, “Jai ! Jai ! for our noble Prince !”