A Lament composed by P. B. Shelley 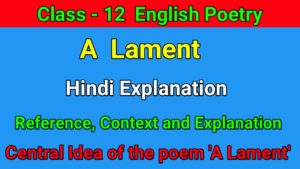 O world ! O Life ! O Time !
On whose last steps I climb,
Trembling at that where I had stood before;
When will return the glory of your prime?
No more – Oh, never more !

Out of the day and night
A joy has taken flight:
Fresh spring, and summer, and winter hoar
Move my faint heart with grief, but with delight
No more – Oh, never more !

Central Idea of the poem – ‘A Lament’

The central idea of the poem ‘A Lament’ composed by P. B. Shelley is that – this poem is a short musical expression of despair and dejection of the poet. The joy of world, life and time has deserted the poet for ever. He feels only grief. He will never feel any joy in this world, in this life and in this time.

Explanation with reference to context of the poem – A Lament

Reference – This stanza has been taken from the poem ‘A Lament’ composed by P. B. Shelley.

Context – In these lines the poet expresses his grief. He feels he would not live long. He is without joy.

Explanation – The poet says that his world is without joy, his life is without happiness and his time is without pleasure for him. Further he says that he has come on the last steps of his life. He had been firm and strong one but now he is trembling with weakness. The poet feels that he will never again get the lost joys of his youthfulness.

Reference – This stanza has been taken from the poem ‘A Lament’ composed by P. B. Shelley.

Context – In these lines the poet expresses his grief. He is without joy. The changing seasons bring him no delight.

Explanation – The poet feels joy neither in the day nor in the night. Joy has left him alone. Fresh seasons of spring, summer and snowy winter come and leave but give him no delight. The poet has nothing else but grief in his weak heart. He has lost his joy for ever. It will never return any more in his life.