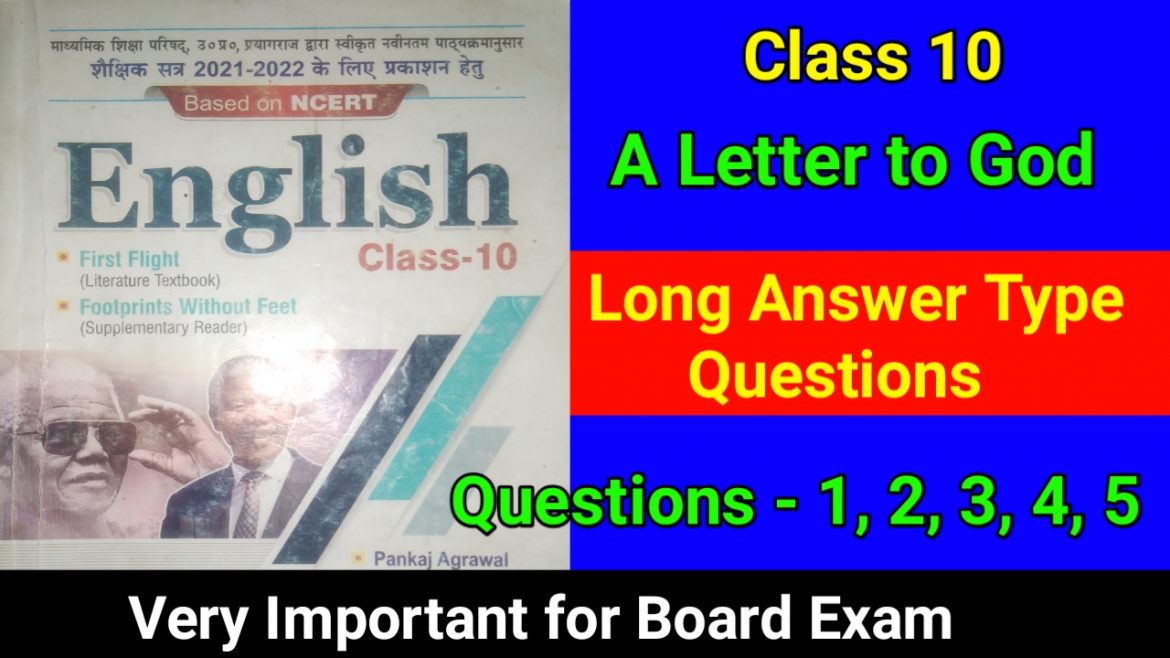 Qu. 1 What was Lencho’s pride and possession?

Ans. Lencho’s pride and possession was his harvest and his great belief in God. Lencho lived in the solitary house on the crest of a low hill in the valley. From here, he could see the river and the field of ripe corn dotted with the flowers that always promised a good harvest. When the hail ruined his crop, his heart was filled with sorrow. But he did not lose hope because he had a great faith in God. He wrote a letter to God and requested Him to send hundred pesos so that he could sow his field again. Therefore, we can say Lencho’s pride and possession was his harvest and great faith in God.

Ans. Lencho was a poor farmer. He works in the fields like an animal. He knew how to write. When the hailstones destroyed his crops completely, his heart filled with sorrow. But he did not lose hope because he had firm faith in God. He wrote a letter to God and requested Him to send hundred pesos so that he can sow his field again and to live until the crop comes. When Lencho got money, he was not surprised because he had a great belief in God. Therefore, we can say Lencho had immense faith in God.

Qu. 3 How did the hailstones affect Lencho’s field? What was Lencho’s only hope?

Ans. Lencho was a poor farmer. He was completely dependent upon the crops of his field. Once a heavy downpour occurred and along with it hailstones also started falling. As a result the field turned white as if it had covered with salt all over. His crop was completely destroyed. Like this the hailstones affected Lencho’s field. In the entire valley there was only one house of Lencho so there was no one to help him in his problem. As Lencho was a great believer in God. So his only hope was help from God.

A Letter to God Hindi Explanation

Qu. 4 How did post office employees help Lencho? How did Lencho react to their help?

Ans. When the postman got the letter of Lencho, he went to his boss laughing heartily and showed him the letter of Lencho. The postmaster, a fat, an amiable fellow also started laughing but almost immediately he turned serious. He decided to answer the letter. But when he opened it, he found to answer it he needed hundred pesos. But he stuck his resolution. He asked for money from his post office employees and himself gave part of his salary. Finally, he could manage only seventy pesos and sent it to Lencho. Like this post office employees helped Lencho. When Lencho got the money, he did not show any surprise. But he became angry when he counted the money because it was only seventy pesos and he had requested God for hundred pesos. He thought that the post office employees had stolen thirty pesos. So, he said the post office employees were a bunch of crooks.

Sentence Formation By Re-ordering Given Words

Qu. 5 Give the character sketch of Lencho.

Ans. Lencho is the main character in the story. The whole story moves around him. He has following qualities –
1. Hard Working Farmer – Lencho was a hard working farmer. He worked in his field like an animal.
2. An Experienced Farmer – Lencho was not only a hard working farmer but also an experienced farmer. He knew his field intimately. That’s why he said that the earth needed a downpour or at least a shower.

3. Literate Farmer – Often farmers were illiterate but Lencho was not so. He was literate.
4. Innocent and Ignorant – Lencho was somewhat innocent and ignorant. The postmaster sent him seventy pesos but he called post office employees a bunch of crooks.
Conclusion – Lencho wrote a letter for help. As a result he got help. If he did not write a letter, he would have not got help.

Qu. 6 Give the character sketch of the postmaster.

3. Empathetic Person – The postmaster felt happy and satisfied when Lencho received the money as he loved to help others.

2 thoughts on “A Letter to God Long Answer Type Questions”