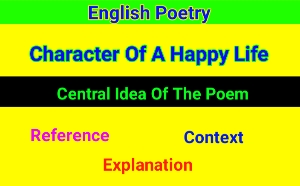 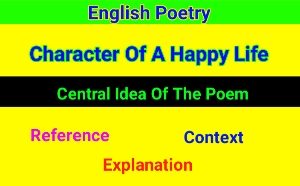 -: Central Idea of the Poem ‘Charater of a Happy Life’ :-

The Central Idea of the poem ‘Character of a Happy Life’ composed by Sir Henry Wotton is that – In this poem the poet describes the qualities of a really happy man. A happy man is honest and truthful. He is the master of his passions. He is not afraid of death. This man does not care for the love of the prince or the criticism of the common people. He is free from rumours. He depends upon the voice of his conscience. A happy man does not care for false flattery. He is not jealous of anyone’s progress. He is a God fearing man and remembers th God day and night. A happy man passes his time in the company of a book or a good friend. He does not care for rise or fall in life. He is rich in heart and is Lord of himdelf.

Explain with Reference to the context of the following –

How happy is he born or taught

That serveth not another’s will;

Whose armour is his honest thought,

And simple truth his utmost skill !

Reference :-  This stanza has been taken from the poem ‘Character of a Happy life’ composed by Sir Henry Wotton.

Context :- In these lines the poet describes the life of really happy man.

Explanation :- The poet says that a really happy man is not dependent on others. He does not work according to the will of others. He is free to do what he thinks proper. This man is not slave to anyone. He does not need need any weapon to protect himself with. Honesty is the only weapon for him. It is his sure defence. He believes in simple truth of life. This simple truth is his best skill.

Who hath his life from rumours freed,

Whose conscience is his strong retreat;

Whose state can not flatterers feed,

Context :- In these lines the poet tells us the qualities of a really happy man.

Explanation :- The poet says that the life of a really happy man is free from rumours. A happy man believes in soul force. In fact, his conscience gives him peave and rest. He keeps balance of mind. He is unaffected by false flattery. This man does not care for his ruin. His enemies can get nothing by his loss. Such a peeson gets true happiness.

This man is free from servile bands

Of hope to rise, or fear to fall;

Lord of himself, though not of lands;

And having nothing, he hath all.

Context :- In these lines the poet describes the life of a really happy man.

Explanation :- The poet says that a happy man is a man of free nature. He loves freedom. He does not care for rise or fall in life. Success does not make him happy and failure does not make him unhappy. He is well – balanced. He has self control. So he is really the Lord of himself. His desires are under his control. Such a happy man may be poor in wordly wealth but he is master of all the world in true sense.