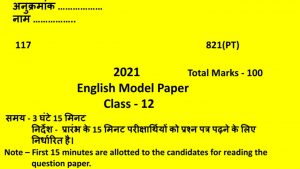 1. Explain with reference to the context any one of the following passages : 10
(a) I tried to explain that I could not buy the basket but extended the gratuity as a substitute. I realized at once what offence I had given. This child of nine, dressed in rags and on the on the edge of starvation, raised her chin, reached into the basket, and with all the pride and graciousness of a lady, handed the money back to me. There was only one thing I could do. I bought the basket.

(b) Yet it is at this very age when in his heart of hearts a young lad most craves for recognition and love; and he becomes the devoted slave of any one who shows him
consideration. But none dare openly love him for that would be regarded as undue indulgence and therefore bad for the boy.

2. Answer any one of the following questions in not more than 30 words : 5
(a) Why did the refugee children descend like locusts on the writer?
(b) Why was Phatik delirious throughout the night?
(c) What is unique about Indian culture?

3. Fill in the blanks in the following sentences with the most suitable words given within the brackets : 4

(a) They lived in cloth and ……… sheds that lined the streets.
(iron, stone, cement, grass)

Our Mobile App for Competitive Exam and Board Exam – https://play.google.com/store/apps/details?id=com.competitive.onlinequiz

(a) Why did Sanku feel suffocated?
(b) Why did the child reject all kinds of offers of the gentleman?
(c) How did the astrologer feel uncomfortable the presence of the stranger?

5. Explain with reference to the context any one of the following extracts : 10

(a) And slowly answer’d Arther from the barge:
The old order changeth, yielding place to new,
And God fulfils Himself in many ways,
Lest one good custom should corrupt the world.

(b) This man is free from servile bands
Of hope to rise, or fear to fall;
Lord of himself, though not of lands;
And having nothing, he hath all.

6. Give the central idea of any one of the following poems : 7
(a) My Heaven
(b) On His Blindness
(c) The Song of the Free

7. Write the definition of any one of the following figures of speech with two examples : 2 + 2 = 4
(a) Metaphor
(b) Personification
(c) Simile

8. (a) Change any one of the following sentences into indirect form of speech : 2
(i) My mother said, “Ravi, obey the rules of road.”

(ii) The teacher said to the principal, “Why do you not pay me my payments?”

(b) Combine any one of the following as directed within the brackets : 2
(i) Obey the rules of road. You will be punished.
(Compound Sentence)

(ii) The poor man worked. He laughed. He thus spent his life. (Simple Sentence)
(c) Transform any one of the following sentences as directed within the brackets : 2
(i) Bring me a glase of water. (Passive Voice)
(ii) No other flower is so sweet as the rose. (Superlative Degree)
(d) Correct any two of the following sentences : 2
(i) He as wall as you are guilty. .
(ii) If I was you, I would never do that.
(iii) I am senior than you.
(iv) Walk carefully lest you may fall.

(d) Substitute one word for the following expressions : 3
(i) Which is fit to eat or consume.
(ii) Government by the people, of the people and for the
people.
(iii) That which can not be conquered.
(e) Use the following words in your own sentences so as to
bring out the differences in their meanings clearly : 2
(i) Vanish
(ii) Banish

12. Read the following passage carefully and answer the questions that follow :
There seems to be a general opinion in the country that Sardar Patel was slightly of a harsh and rough temperament. People call him ‘Iron man of lndia’. He was, no doubt, an iron man, the sense that and one could rely on him for strict and efficient administration. But as a man, to those who had the good fortune of coming into close contact with him, he was kind and considerate. At times he even became emotional, where his personal friends and followers were concerned. However, it goes without saying that the Sardar had the great skill for organising affairs. He knew the way of picking people and putting them in their proper places. Once he judged the man and found him correct, he trusted him fully and got him to do anything he wanted. His love for all and sundry was boundless.

(a) Why was Sardar Patel called the ‘Iron Man of India’? 2

(b) What kind of man was ‘Sardar’in his private life? 2

(c) (i) Explain the underlined portion in the passage. 1

(ii) Give a suitable title to the above passage. 1