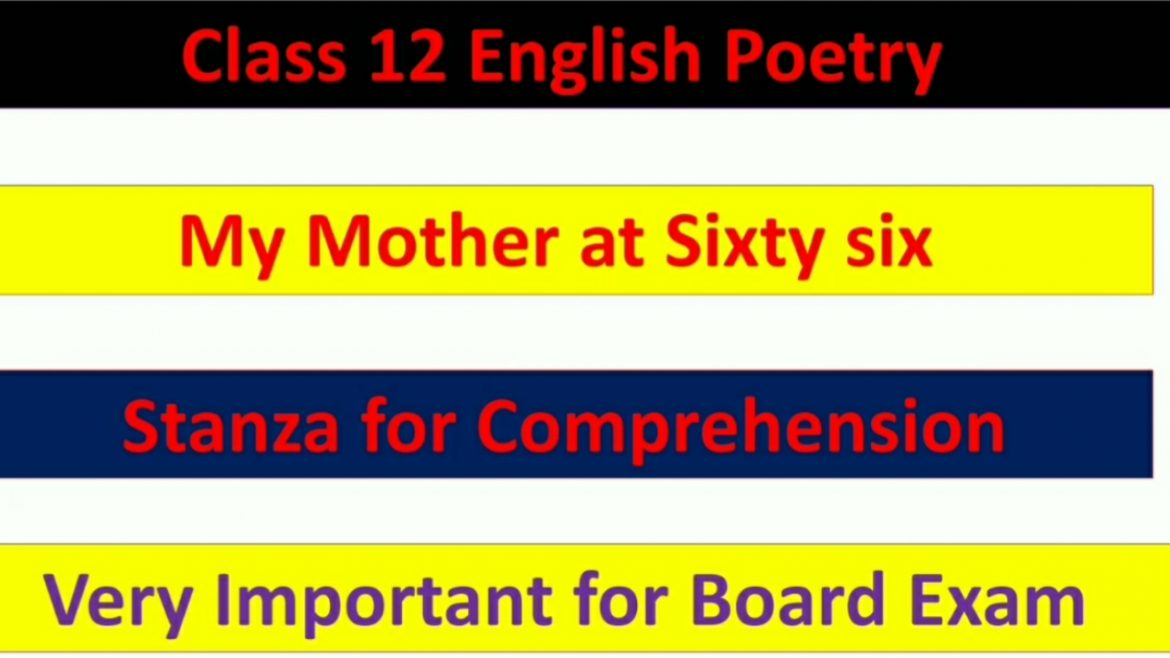 Stanza for comprehension of the poem My Mother at Sixty six 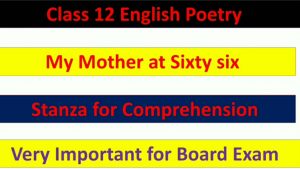 Stanza for comprehension of the poem My Mother at Sixty six

Read the extract given below and answer the questions that follow :

“Driving from my parent’s
home to Cochin last Friday
morning, I saw my mother,
beside me,
doze-open mouthed, her face
ashen like that
of a corpse

1. Name the poem and the poetess.

Ans. The name of the poem is ‘My Mother at Sixty-Six’ and the poetess is Kamala Das.

2. Where was the poetess driving to?

Ans. The poetess was driving from her parents’ home to Cochin airport on a Friday morning.

3. What did she notice about her mother?

Ans. The poetess noticed that her mother was sleeping with her mouth opened and the mother’s face was very pale, just like that of a dead body.

4. Why was her mother’s face looking like that of a corpse?

Ans. Her mother’s face had lost all its glow and colour of youth due to ageing. It looked pale, faded and nearly lifeless. That was why it was looking like a corpse’s face.

Our Mobile App for Board Exam –

And realised with pain
that she was as old as she
looked but soon
put that thought away,

1. What worried the poetess when she looked at her mother?

Ans When the poetess looked her mother, she looked pale and faded, just like a corpse, which worried the poetess. This indicated that her mother may die very soon.

2. Why was there pain in her realisation?

Ans. The poetess felt pain in her realisation because she would not see her mother again, as she may die soon.

3. Why did she put that thought away?

Ans. The poetess put that thought away because she had distracted by thinking about her mother’s impending death.

4. Identify the figure of speech used in these lines.

Ans. ‘Simile’ is used in these lines when the colour of her mother’s face is ashen, like that of a corpse.

Ans. ‘I’ is used for the poetess, Kamala Das.

And looked out at Young
Trees sprinting, the merry children spilling
out of their homes, but after the airport’s
security check, standing a few yards
away, I looked again at her.

1. Who went for security check and who is ‘her’ in the above lines?

Ans. The poetess, Kamala Das, went for security check at the airport. ‘Her’ in the above lines refers to the poetess’s mother.

2. What does the poetess compare her mother’s face to and why?

Wan,
pale
as a late winter’s moon and felt that
old
familiar ache, my childhood’s fear,
but all I said was, see you soon,
Amma,
all I did was smile and smile and
smile …..

2. What was the poetess’s childhood fear?

Ans. The childhood fear was that of losing her mother.

3. What were the poetess’s parting words?

Ans. The poetess’s parting words were, “See you soon, Amma”.

4. What does the repeated use of the word, ‘smile’ mean?

Ans. Repeated use of the word ‘smile’ means a pretended cheerful of smile. So the poetess smiled for a long time to make her mother happy.