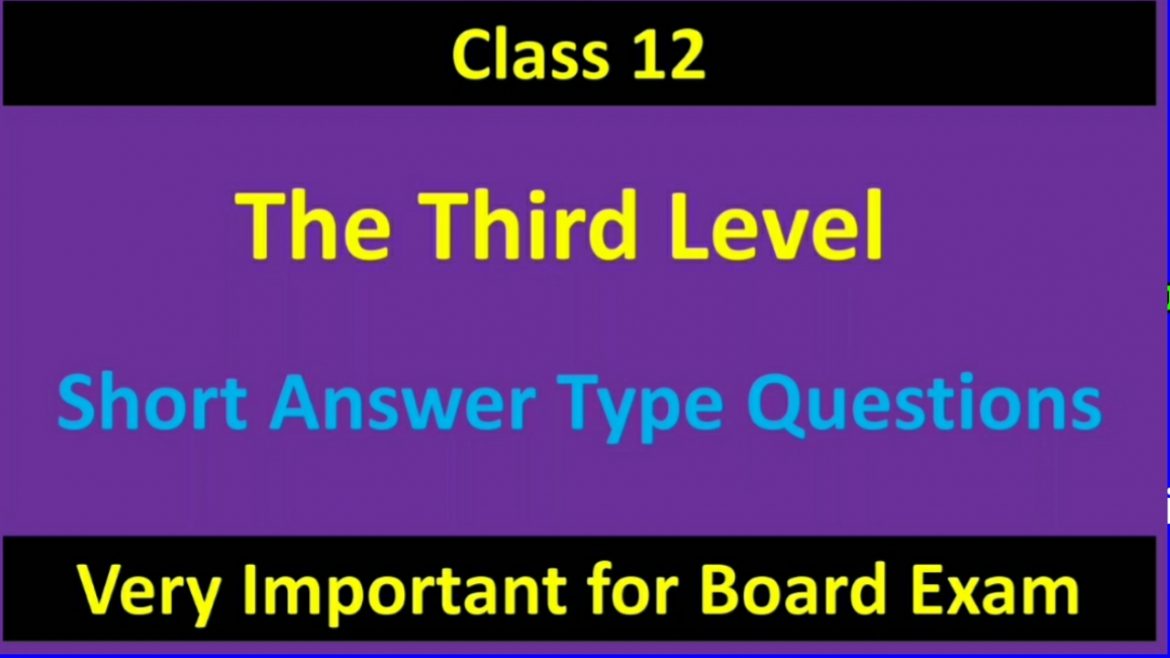 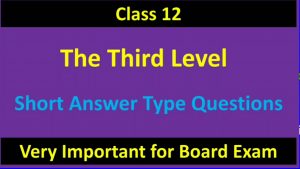 Qu. 1 What was the third level? Where was it situated?

Qu. 2 Who was psychiatrist? What did he tell about the third level?

Qu. 3 What about his grandfather did Charley tell to his friend?

Ans. Charley told his friend about his grandfather that he lived in nice and peaceful times, yet he was one who had started the stamp collection. He did not need any temporary refuge from reality.

Qu. 4 How did Charley enter in the third level?

Ans. One night, Charley worked late at his office. He was in a hurry to get home. So he went to Grand Central Station to catch a suburban train. But he was lost in corridor. He thought it was a second level. But according to Charley, he had entered in the third level.

Qu. 5 Why did Charley think that Grand Central is growing like a tree, pushing out new corridor and staircase like roots?

Qu. 6 What did Charley find when entered to the third level?

Ans. According to Charley, when he entered the third level, he saw the people wearing old fashioned dresses, an old locomotive, newspaper dated June 11, 1894, brass spittoons, flickering gas light and many other things related to that century.

Our Mobile App for Class 12 – https://play.google.com/store/apps/details?id=com.knowledgebeem.online

Qu. 7 What did Charley do to make sure that he was on the third level?

Ans. To make sure that he was on the third level, Charley went to a newsboy and saw the stack of newspapers. It was ‘The World’ which has not been published for years. Later, he found the front page in the Public Library files and it was printed June 11, 1894.

Qu. 8 What information about Galesburg, Illinois is given in the text?

Qu. 9 What happened with Charley at the ticket window?

Ans. When Charley went to the ticket window for two tickets to Galesburg. He paid the currency of the present world which was totally different from 1890’s world. On seeing the big notes, the clerk got stunned and he thought that Charley was trying to skin him.

Qu. 10 Did Charley find the corridor at Grand Central Station again? Why or why not?

Ans. No, Charley did not find the corridor at Grand Central Station again. It was not present in reality because it was only an imagination of Charley.

Qu. 11 Who was Sam Wiener? Where was he disappeared and why?

Ans. Sam Wiener was a psychiatrist. He was friend of Charley. He disappeared all of sudden but Charley could make a guess because he knew that Sam liked Galesburg very much. So, according to Charley, Sam was disappeared in Galesburg because he liked it to start his business.

Qu. 12 What was ‘stamp collection’? How was it related to Charley?

Ans. ‘Stamp collection’ was the link which joins the past and present in the story. This collection was passed on to Charley from his grandfather.

Ans. When a new stamp is issued, stamp collector buy some. They use them to mail envelopes to themselves on the very first day of sale. The stamp of the post office proves the date. The envelope is called the first – day cover.

Qu. 14 What did Sam write in his letter to Charley?

Ans. Sam wrote in his letter to Charley that he had found the third level and he had reached there. Sam was saying in his letter that he was staying there in Galesburg since last two weeks and watching various activities. He invites both Charley and his wife Louisa there. So, we can say that Sam was also a victim of worldly worried like Charley.

Qu. 15 Why did Sam bought old currency of eight hundred dollars? What did he do with it?

Ans. According to Charley, Sam bought old currency of eight hundred dollars because of going to 1894’s Galesburg and Charley hoped that Sam would set up a hey, feed and grain business in 1894’s Galesburg with these money.

Our Mobile App for Class 12 – https://play.google.com/store/apps/details?id=com.knowledgebeem.online