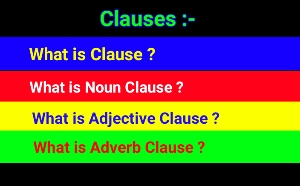 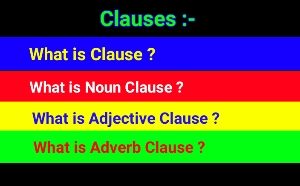 A clause is a group of words that has a subject and a predicate, and is a part of a sentence.

Main clause (also called co-ordinate clauses)
A main clauses has a subject and predicate and can stand alone as a sentence.

These two clauses are independent and they are joined by a co-ordinating conjunction.

A subordinate clause is introduced by a subordinating conjunction or relative pronoun.

A clause that is used to work as a noun is called a noun clause.
A noun clause is generally introduced by question words, such as – what, why, when, who, how. They are also introduced by if or whether.

A noun clause can be :
1. The subject of verb
Whoever stole the necklace will be caught.

What he said was true.

2. Object to a verb
She says that she will help me.

I did not hear what he said.


3. The object to a verb
He did not laugh at what you said.
I do not approve of what you are doing.

4. Complement of a verb
This is what I expect.
Life is what you make it.


Adjective clause are introduced by who, whom, whose, which, that.
Examples :-

An adverb clause is a subordinate clause that modifies a verb, an adverb or an adjective.
It tells when, where, how, why, to what extent or under what condition the action happens.


An adverb clause is introduced by the subordinating conjunction when, before, while, till, as, after, since etc.
Examples :-