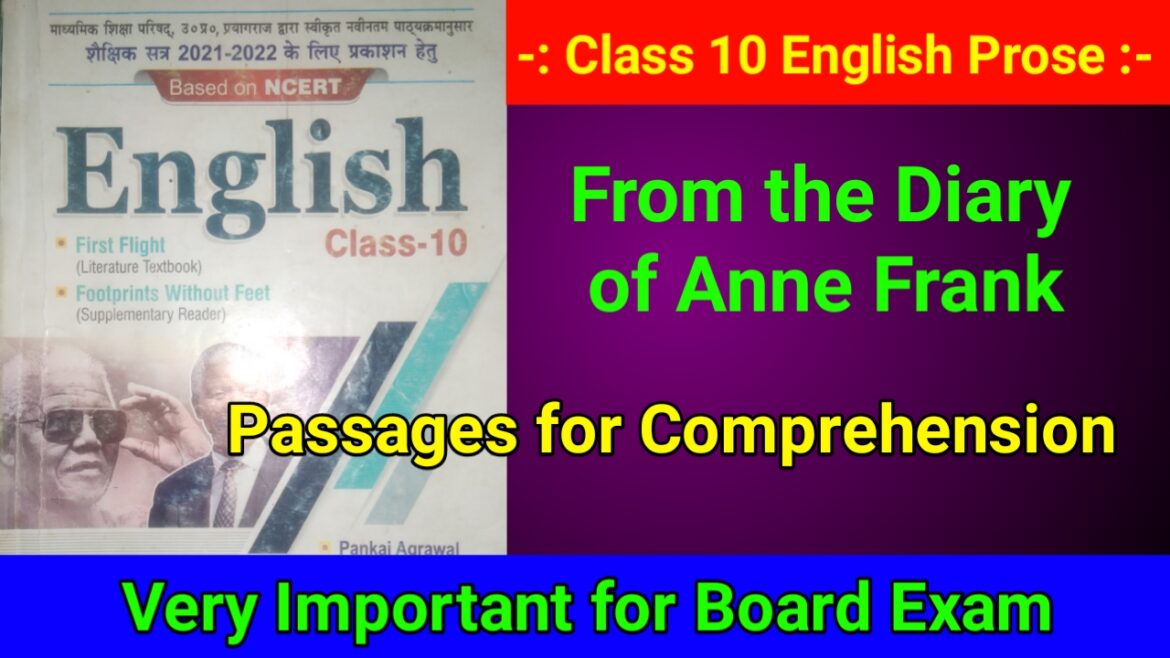 From the Diary of Anne Frank Passages for Comprehension 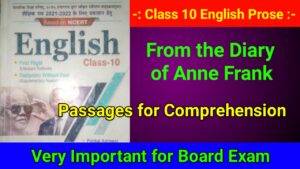 From the Diary of Anne Frank Passages for Comprehension

PASSAGE – 1
Now I’m back to the point that prompted me to keep a diary in the first place : I don’t have a friend. Let me put it more clearly, since no one will believe that a thirteen – year – old girl is completely alone in the world. And I’m not. I have loving parents and a sixteen – year – old sister , and there are about thirty people I can call friends. I have a family, loving aunts and a good home. No, on the surface I seem to have everything, except my one true friend. All I think about when I’m with friends is having a good time. I can’t bring myself to talk about anything but ordinary everyday things.

2. What will no one believe?
Answer – No one will believe that a thirteen year old girl is completely alone in the world.

PASSAGE-2
We don’t seem to be able to get any closer, and that’s the problem. Maybe it’s my fault that we don’t confide in each other. In any case, that’s just how things are, and unfortunately they’re not liable to change. This is why I’ve started the diary. To enhance the image of this long-awaited friend in my imagination, I don’t want to jot down the facts in this diary the way most people would do, but I want the diary to be my friend, and I’m going to call this friend ‘Kitty’. Since no one would understand a word of my stories to Kitty if I were to plunge right in, I’d better provide a brief sketch of my life, much as I dislike doing so.

PASSAGE-3
I get along pretty well with all my teachers. There are nine of them, seven men and two women. Mr Keesing, the old fogey who teaches maths, was annoyed with me for ages because I talked so much. After several warnings, he assigned me extra homework. An essay on the subject, ‘A Chatterbox’. A chatterbox – what can you write about that? I’d worry about that later, I decided. I jotted down the title in my notebook, tucked it in my bag and tried to keep quiet. That evening, after l’d finished the rest of my homework, the note about the essay caught my eye.

PASSAGE-4
I began thinking about the subject while chewing the tip of my fountain pen. Anyone could ramble on and leave big spaces between the words, but the trick was to come up with convincing arguments to prove the necessity of talking. I thought and thought, and suddenly I had an idea. I wrote the three pages Mr Keesing had assigned me and was satisfied. I argued that talking is a student’s trait and that I would do my best to keep it under control, but that I would never be able to cure myself of the habit since my mother talked as much as I did if not more, and that there’s not much you can do about inherited traits.

2. How many pages did she write?
Answer – She wrote three pages.

3. What did she argue in her essay?
Answer – She argued in her essay that talking is a students trait and that she would do her best to keep it under control.

PASSAGE-5
Mr. Keesing was trying to play a joke on me with this ridiculous subject, but I’d make sure the joke was on him. I finished my poem, and it was beautiful! It was about a mother duck and a father swan with three baby ducklings who were bitten to death by the father because they quacked too much. Luckily, Mr Keesing took the joke the right way. He read the poem to the class, adding his own comments, and to several other classes as well. Since then I’ve been allowed to talk and haven’t been assigned any extra homework. On the contrary, Mr Keesing’s always making jokes these days.

1. What was Mr Keesing trying?
Answer – Mr. Keesing was trying to play a joke on Anne Frank with ridiculous subject.

2. About whom was the poem?
Answer – The poem was about a mother duck and a father swan with three baby ducklings.

3. Who was bitten by whom?
Answer – It were baby ducklings who were bitten to death by the father swan.