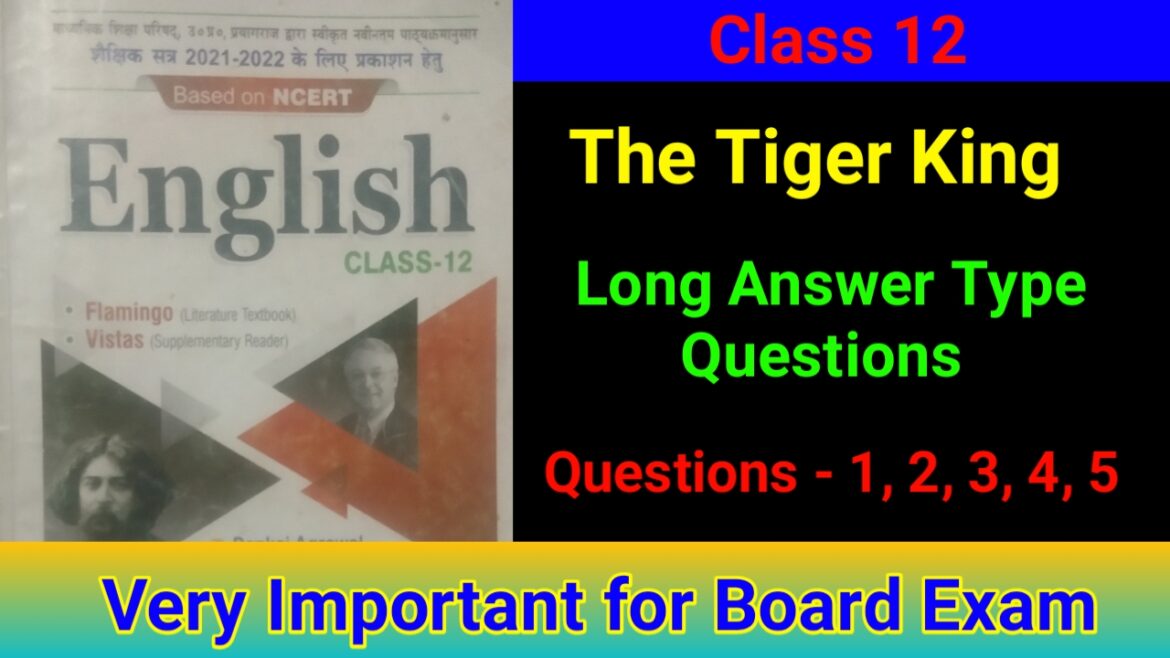 Question 1. Who was the tiger king? What were his other names? How was he named as the tiger king?
Answer – The Maharaja of Pratibandapuram was the tiger king. His other names were His Highness Jamedar General, Khiledar Major, Sata Vyaghra Samhari, Maharajadhiraj Visva Bhuvana Samrat, Sir Jilani Jung Jung Bahadur, M.A.D., A.C.T.C., or C.R.C.K. But this name is often shortened to the tiger king. He got the name of tiger king because when he was born, the astrologers foretold that his death would come from a tiger. When the king came at the age of twenty years, he came to know about this prophesy. There were many forests in his state. The Maharaja started tiger hunting. He was thrilled beyond the measure when he killed his first tiger. He showed it to the state astrologer. But the state astrologer said, ” Your Majesty may kill ninety nine tigers in the same manner. But, you must be very careful with the hundredth tiger.” The Maharaja decided to kill hundred tigers first before doing anything else. Tiger hunting was banned by anyone except the Maharaja.

Question 2. How was the crown prince Jilani Jung Bahadur brought up? Why did he call the state astrologer? What did the astrologer say?

Answer – The crown prince Jilani Jung Bahadur drank the milk of an English cow, was brought up by an English nanny, tutored English by an Englishman, saw nothing but English films. Day by day the tiger king grew taller and stronger. Like this the tiger king was brought up. When the Jilani Jung Bahadur killed his first tiger, he was very thrilled. He called the state astrologer to show him the dead tiger. The state astrologer said, ” Your Majesty may kill ninety nine tigers in the same manner. But, you must be very careful with the hundredth tiger.” The Maharaja decided to kill hundred tigers first before doing anything else. Tiger hunting was banned by anyone except the Maharaja.The astrologer had predicted that the newly born prince would grow up to become the hero of the heroes, warrior of the warriors and champion of the champions. He had also predicted that the baby was born in the hour of the bull. The bull and the tiger are enemies. Therefore, he would die because of the tiger.

Question 3. What was the vow of the Maharaja? How did he fulfil it and what dangers did he face?

Essay on Wonders of Science

Question 4. What happened when there remained only one tiger to complete the counting of hundredth? What reactions did the minions and public face due to Maharaja’s rage? How did the dewan handle the situation?

Answer – When there remained only one tiger to complete the counting of hundredth, the Maharaja’s anxiety reached a fever pitch. As the Maharaja has killed ninety nine tigers, he was to kill just one more tiger to complete his total of hundred tigers. He was very anxious and curious to kill the hundredth tiger. But inspite of being in the forest for many days, the king was unable to find the hundredth tiger so his fury and obstinacy mounted alarmingly. The minions and the public had to face Maharaja’s rage because many officers lost their jobs and the king ordered the Dewan to double the land tax and to resign from the post. The dewan managed the situation to find the hundredth tiger just by bringing a tiger from People’s Park in Madras. It was very old tiger.

Question 5. How did the hundredth tiger take its revenge? Was the king dead? How? Explain.

Answer – The hundredth tiger which was a toy tiger. On his son’s third birthday, the Maharaja bought a wooden toy tiger for his son as a birthday gift. One day while the Maharaja was playing with it with his son, one of its slivers pierced his right hand. He pulled it out with his left hand and continued to play with his son. The next day, infection flared in the Maharaja’s right hand and in four days it spread all over his arm. Three famous surgeons were brought in from Madras and after consultation they decided to operate. The operation took place but the king was dead. In this manner the hundredth tiger took its revenge upon the tiger king.