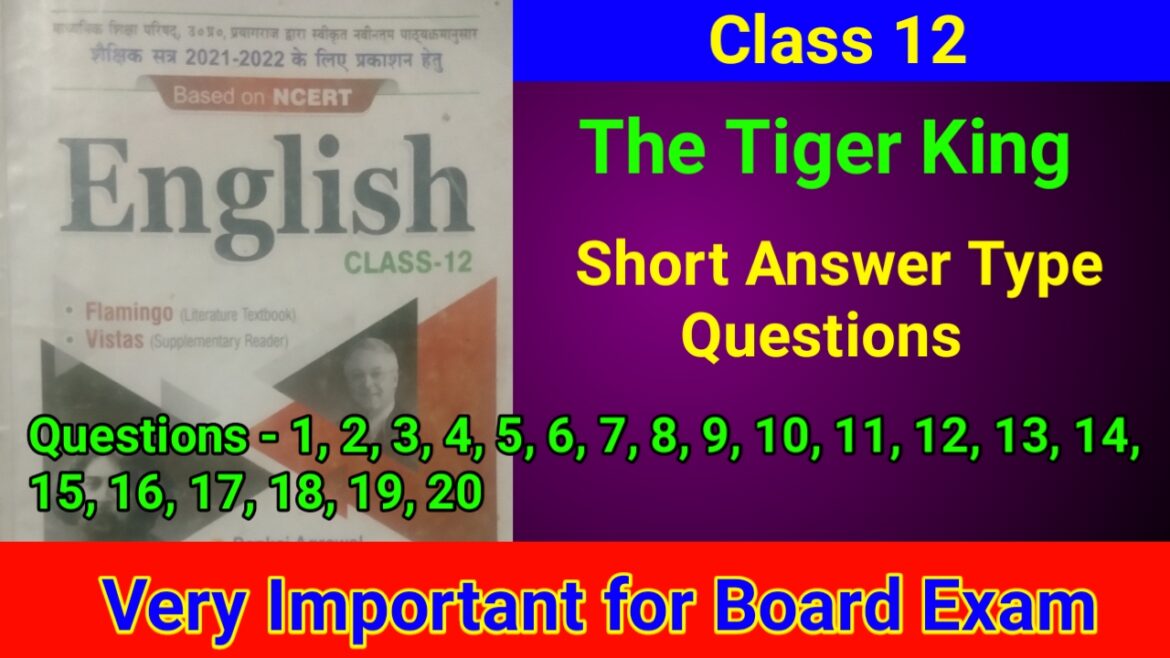 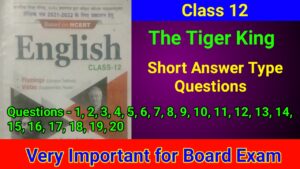 Answer the following questions in not more than 30 words each :

Question 3. What miracle did take place at the time of tiger king’s birth?

Question 4. What did the astrologer tell about the death of the tiger king?

Answer – The astrologer told about the death of the tiger king that his death would come from a tiger. He also told that the king would kill 99 tigers but he would have to be very careful from hundredth tiger.

Question 5. What terrifying words emerged from the lips of the tiger king?

Answer – “Let tigers beware” these terrifying words were emerged from the lips of the tiger king with a deep growl.

Question 6. How was the tiger king brought up?

Question 7. What was the astrologer’s prediction?

Answer – The astrologer’s prediction was that the newly born prince would grow up to become hero of the heroes, warrior of the warriors, champion of the champions. He also predicted that the baby was born in the hour of the bull. The bull and the tiger are enemies, therefore, death would come from the tiger.

Question 8. Why did the Maharaja kill the tigers in the forest of his state Pratibandapuram?

Answer – The Maharaja killed the tigers in the forest of his state Pratibandapuram because the astrologers had predicted that the death would come from tiger. Therefore, the Maharaja decided to kill the tigers to defend himself.

Question 9. What did the astrologer say at the death of first tiger?

Answer – The astrologer said at the death of the first tiger that the Maharaja might kill ninety nine tigers, but must be very careful with the hundredth tiger.

Question 10. Why was it the celebration time for the tigers of Pratibandapuram?

Answer – It was the celebration time for the tigers of Pradibandapuram because the state banned tiger hunting by anyone except the Maharaja.

Question 11. Why was the king once in danger of losing his throne?

Answer – Once the king was in danger of losing his throne because he had refused the permission of a British officer who wanted to hunt a tiger in Pratibandapuram.

Question 12. How did the king save his throne? How much loss did he bear?

Answer – The king saved his throne just by sending fifty diamond rings to the wife of British officer. He thought that the lady would keep one or two rings and send back the remaining. But she kept all the fifty rings. The king had to bear the expense of three lac rupees for it but he managed to save his throne.

Question 13. Why did the tiger king decide to marry?

Answer – The tiger king decided to marry because he had killed all the tigers in his kingdom. But the number of killed tigers was only seventy. He still needed thirty more tigers to kill to fulfill his vow. Therefore, he decided to marry the princess from the kingdom which had a large number of tiger population.

14. What happened when there remained only one tiger to be hunted?

Answer – When there remained only one tiger to be hunted, the Maharaja’s anxiety reached a fever pitch. As the Maharaja has killed ninety nine tigers, he was to kill just one more tiger to complete his total of hundred tigers. He was very anxious and curious to kill the hundredth tiger.

15. What happened when the tiger king did not find any tiger for hunting?

Answer – When the tiger king did not find any tiger for hunting, his fury and obstinacy mounted alarmingly. Many officers lost their jobs and he ordered the Dewan to double the land tax.

Question 16. How did the dewan manage the situation to find the hundredth tiger when the king became extremely furious?

Answer – When the king became extremely furious, the dewan managed the situation to find the hundredth tiger just by bringing a tiger from People’s Park in Madras. It was very old tiger.

Question 17. When the hunters went close to look the dead hundredth tiger, what happened?

Question 18. What gift did the king find perfect to give his son on his birthday and why?

Question 19. How was the birthday gift? What happened with the king?

Answer – The birthday gift was a wooden tiger. It was carved by an unskilled carpenter. It had a rough surface with tiny slivers of wood standing up like quills all over it. One of those slivers pierced the Maharaja’s right hand. Although the king pulled it out, his arm got infected.

Question 20. How was the operation successful?

Answer – The operation was successful as the prediction came true. The hundredth tiger took away the life of the king. The tiger king died.