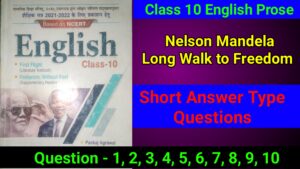 Question. 1 Where did the oath taking ceremony take place?

Ans. The oath taking ceremony took place in the Union Buildings of Pretoria.

Question – 2 What ideals did Mandela set out for the future of South Africa in his speech?

Answer – Mandela set out ideals for the future of South Africa as he had deep feelings for his country and countrymen. He pleaded to liberate all the people from poverty, deprivation and discrimination.

Question – 3 How according to Mandela, had apartheid policy affected South Africa?

Answer – According to Mandela, apartheid policy had affected South Africa deeply. It had created deep and lasting wound in the country and its people. It will take a long time to heal this wound.

Question – 4 What did Mandela think about the oppressor and the oppressed?

Answer – About the oppressor and the oppressed, Mandela thought that both are robbed alike of their humanity. A man who takes away another man’s freedom is a prisoner of hatred. In the same way if a man freedom is taken away, he is not free. So both of them must be liberated.

Question – 5 What according to Mandela is true freedom?

Answer – According to Mandela, true freedom means that freedom which is not obstructed in leading a lawful life.

Question 6 What are the twin obligations referred to by Nelson Mandela?

Ans. According to Nelson Mandela, every man has two obligations in his life. The first is his family, his parents, his wife and children. The second is his country, his people and community.

Question – 7 What was unique in the inauguration ceremony?

Answer – The inauguration ceremony took place in the amphitheater formed by the Union Buildings in Pretoria. It was really a unique occasion as for decades, this had been the seat of white supremacy. Now it was the oath taking ceremony day for South Africa’s first democratic, non-racial government.

Answer – It was the day of 10th May, 1994. The first democratic, non-racial government was to be installed. South African men, women and children of all races were present there. Moreover, dignitaries from different countries participated in the ceremony.

Question – 9 What did the generals and police officers do on that day?

Ans. The generals and police officers were also there in their uniform. They had ribbons and medals on their chests. They saluted Mandela with great respect as Mandela was the first black President of South Africa. Although many years ago they might have arrested him.

Question 10 What is the greatest wealth of the nation in Mandela’s opinion?

Ans. In Mandela’s opinion, the greatest wealth of a nation is not minerals and gems but its good and honest citizens.