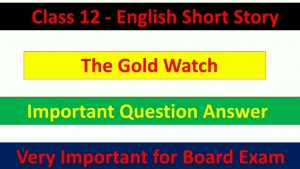 Short Answer type questions of the lesson ‘The Gold Watch’

Answer the following questions not more than 30 words each :

Qu. 1 Where did Sanku work?

Ans. Sanku worked in a factory as a low-paid labourer.

Qu. 2 What were Sanku’s problems and how did he plan to solve them?

Ans. There were two main problems of Sanku –
to meet the expenses of his family within his small income.
to repay the loans which he owed from several people.
He planned to solve them by stealing the gold watch of his engineer.

Qu. 3 What did Sanku’s wife ask him to bring from the market?

Ans. Sanku’s wife asked him to bring an ointment for the sores and two ripe bananas from the market.

Qu. 4 What stopped Sanku from stealing the watch in the beginning?

Ans. Sanku’s cowardice, hesitation and fear of being caught stopped him from stealing the watch in the beginning.

Qu. 5 What made Sanku decide that he had no other choice but to steal?

Ans. Sanku’s urgent needs and pressure of the people to pay loans made him decide that he had no other choice but to steal.

Qu. 6 What were Sanku’s feeling before stealing the watch?

Ans. Before stealing the watch Sanku felt a mental conflict in his mind. His heart was beating very fast. He had a mixed feeling to steal or not due to fear. He was trembling with fear.

Qu. 7 What thoughts troubled Sanku after committing the theft?
Or Why did Sanku feel suffocated?

Ans. After committing the theft, Sanku thought that someone had seen him stealing the watch. He would be caught, insulted and dismissed from his job. These thoughts troubled Sanku very much.

Qu. 8 What time of the day did Sanku think was the most suitable for stealing the gold watch and why?

Ans. Sanku thought that the lunch time was the most suitable for stealing the gold watch. He thought so because at that time the engineer and the workers used to go out for lunch and rest.

Qu. 9 Why did Sanku curse himself?

Ans. When Sanku knew that his wife was pregnant, he thought that the new child would be another burden on him. So he cursed himself.

Question. Whose watch was it?
Ans –