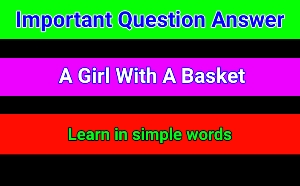 Important Questions Answers - A girl with a basket 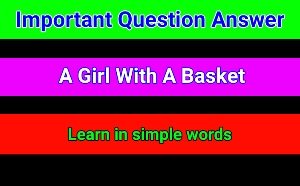 Qu.1  What did William C. Douglas do to know about the real feelings of the people in India?

Ans. To know about the real feelings of the people in India, William C. Douglas talked to the English - knowing Indians on his journey. He talked abour the world politics and the current topics of the day.

Qu. 2  Mention the scene and things the writer saw on his way from Delhi to Ranikhet?

Ans.  On his way from Delhi to Ranikhet the writer saw the flooded Ganga, rice fields, jungles, grass, trees, monkeys, villages, huts, pumpkins, the refugee children, the basket, the fans and the girl of nine years.

Qu. 3  What disturbed the continuity of the writer's conversations at one of the stations?

Ans.  At one station a group of refugee children surrounded the writer. They were selling baskets. This disturbed the continuity of the writer's conversation at that station.

Qu. 4  Why were these children discribed as refugees?

Ans.  These children were discribed as refugees because their parents had been driven out of Pakistan. Having left all their property and houses they had to come to India as refugees.

Qu. 5  Why did the refugee children descend like locusts on the writer?

Ans.  The poor children thought that the American writer was a good customer. Therefore they descended like locusts on him to sell their baskets.

Qu. 6  What made the writer realise that he had given offence by extending the gratuity to the girl as a substitute for not buying the basket?

Ans. The girl did not accept the writer's gratuity and returned the money with pride and grace. This made the writer think that his gratuity had offended her.

Important Questions Answers - A girl with a basket

Qu. 7  What picture did the author carry back in his mind of India and her people as a whole?

Ans.  The writer thought that the people of India were full of self respect and dignity. They were full of decency, a sense of citizenship and desire for freedom. Thus he carried back in his mind a noble picture of our country and the people.

Qu. 8  What did he see on the platforms?

Ans.  He found the platforms packed with people of different religions and occuptions. The people were barefoot and dressed in loose white garments.

Qu. 9   What was the plight of the refugees? What were they doing for living?

Ans.  The plight of the refugees was very miserable. They had to leave their property and houses in Pakistan. These refugees were without occuption. They were poor, homeless and jobless. For their living they sold cheap hand made articles.

Qu. 10  What were children selling at a railway station according to William C. Douglas? Why were they doing so?

Ans.  They were selling hand made reed basket for their livelihood.

Qu. 1  Describe the things and scenes the writer saw on his way from Delhi to Ranikhet.

Ans.  William C. Douglas, a judge of the Supreme Court of the U.S.A., visited India in 1950. In the lesson 'A girl with a basket' he describes the things and scenes which he saw on his way from Delhi to Ranikhet. The route from Delhi to Bareilly passes through the plain of the upper Ganga river. The Ganga was in flood. The dirty water looked brown. Thousands of acres of rice fields were covered with the water of the swelling Ganga. To the north of the railway track there were jungles. There were higher grass - higher than man - for miles and miles of great expenses. There were places with clump of trees also. The thickness of the high grass and trees gave shelter to dangerous tigers, elephants, pythons and cobras.

The writer described a number of trees in their natural shape. He found the air humid. He also found monkeys with their babies clinging to them. There were villages which had mud huts thatched with grass and bamboo. The walls and the thatched were covered with pumpkin vines with yellow flowers in them. The natural scenery filled the heart of the writer with inner happiness.

Qu. 2  Why had William C. Douglas fallen in love with India.

Ans.  The  writer was going from New Delhi to Bareilly by train on his way to Ranikhet. When he got down at one station, a group of refugee children surrounded him. They were selling reed baskets with simple designs. The writer bought some baskets. His arms were filled with them and he did not want to buy any more.

Among the refugee children, there was a girl of nine years. She wanted to sell her basket to the writer. She wanted a rupee and a half for it. The girl was very poor. She was dressed in rags. There were tears in her eyes. Her voice was very touching. The writer had already bought a number of baskets. He had no need to buy any more.

The author was deeply moved by the poverty and pitiable pleading of the girl. He, therefore, put fifteen cents into her basket as charity. This hurt her self respect. The girl was starving and dressed in rags but she had a strong sense of self respect. She did not want money as alms. She raised her head high and with pride of and full grace she returned the money to the writer. Her sense of self respect impressed the writer so deeply that he bought her basket. The girl wiped her tears, smiled and ran towards her hut. In this way the writer was deeply touched by the dignified behaviour of the girl. In fact, the girl was a symbol of Indian culture. This incident was one reason for his having fallen in love with India.